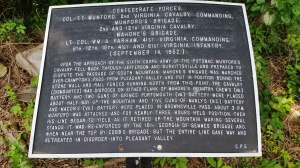 The Battle of Crampton’s Gap, fought on September 14, 1862, was part of the larger Battle of South Mountain preceding the Battle of Sharpsburg (aka Antietam.)

A small force of Confederate soldiers, including the 16th Georgia under Brig Gen Howell Cobb, were dispatched there to delay the advance of about 13,000 Union troops of Franklin’s VI Corps. The 16th Georgia, in support of Cobb’s Legion led by Lt Col Jefferson Mirabeau Lamar, advanced down the steep mountain and came upon fellow Confederates of Parham/Munford’s retreating up the mountainside. Lamar immediately saw troops of the Union VI corps advancing in pursuit and cried to the men to follow him in a counterattack. Lamar boldly charged his horse forward, but found the maneuver foolish, as the steep grade of the hillside caused horse and rider to fall to the ground. Unfazed, Lamar, leapt to his feet and continued the charge. He put his men into position on the flank of the Union attacking column and unleashed volley after volley into their ranks. But it was already too late.

“In this horrible predicament the Legion likely would have followed Munford’s men in panicked retreat up the mountain. But its lieutenant colonel, Jefferson M. Lamar, held them to their impossible work until he had been twice shot, once mortally.” (Sealed with Their Lives: Battle of Crampton’s Gap, Burkittsville, MD, Sept. 14, 1862, Timothy Reese, Butternut & Blue, October, 1998.)

Slocum’s Division of the Union VI corps charged straight up the mountain, traversing almost vertical ground. Outnumbered nearly 15:1, the Confederates were forced up the mountain and through Crampton’s Pass. Although unsuccessful in holding the gap, the Union advance was delayed long enough to allow more time for Genl. Robt E Lee and the Army of Northern Virginia to become better organized.

The 16th Georgia suffered heavy casualties. Of the 368 members engaged at South Mountain (Crampton’s Gap), 52% were disabled (wounded, killed, captured, or missing.) The following members of the 16th Georgia Volunteer Infantry were killed in the Battle of Crampton’s Gap:

The Confederate dead were initially buried around Burkittsville, MD at the foot of the mountain. Those who were killed on the battlefield were buried where they fell. Those who were wounded and captured, were transported to Union field hospitals which had been established at churches and farms in Burkittsville.

Most of the the graves are of Confederate soldiers who died in the nearby battles of Antietam and South Mountain. More than 2000 soldiers are buried here but only 346 were identified. Only three of the graves have any markers, but an old map of the cemetery is mounted on a plaque at the site. The plaque shows the locations of some burials by name. 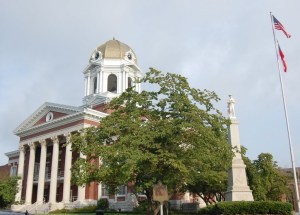 “Let this stranger who may in future time read this inscription and recognize that there were men whom power could not corrupt, death could not terrify, defeat could not dishonor; let these virtues plead for judgment in the cause for which they perished. Let Georgia remember that the state taught them how to live and how to die; and that from her broken fortunes, she has preserved for her children, the priceless treasure of her memories, teaching all who may claim the same birthright, that truth, virtue and patriotism endure forever”. ~ From the Confederate Monument at Cartersville, GA

Members of the 16th Georgia Infantry Killed at Gettysburg, July 2, 1863

The men with Find A Grave memorials were identified and removed to Laurel Grove North in Savannah. I have no idea how many others might have been returned unidentified. After the war, the Savannah Ladies’ Memorial Association paid Dr. Rufus Weaver of Pennsylvania to disinter and ship 101 fallen Georgians back home, which was accomplished in 1871.

My connection to the 16th Georgia is through my husband. His gg grandfather, Pvt. William Walker Fitts, served in Company D “Danielsville Guard” and was killed at the Bloody Angle at the Battle of Spotsylvania Courthouse. When I attempted to gather information on my husbands ancestor, I realized that the resources are few.

On December 8, 1860, Howell Cobb wrote to President James Buchanan resigning his position as US Secretary of the Treasury to return to Georgia: “If, as I believe, history will have to record yours as the last administration of our present Union, it will also place it side by side with the purest and ablest of those that precede it.”

Just over a month later, on January 19, 1861, the Georgia Secession Act passed by a vote of 208 to 89, due largely to the influence of Howell Cobb and his brother, Thomas Reade Rootes Cobb. On February 4, 1861, Howell Cobb was elected President of the Provisional Congress of the Confederate States at Montgomery AL and, at 1pm on February 18, 1861, he administered the oath of office to Jefferson Davis and Alexander Stephens at the State Capitol in Montgomery AL.

By June 26, 1861, the Southern Banner reported, “Hon. Howell Cobb has also been to Virginia for the purpose of making arrangements to raise a regiment. We learn that he has been commissioned and will be here very soon to perfect the organization. His clarion voice will soon be heard in the mountains of the Old Sixth (Congressional District), where ‘One blast from his bugle-horn, Is worth a thousand men.’” And certainly, it was. The ten companies were quickly filled and the 880 men were encamped in Richmond by August 11, 1861.

Today, the history of the gallant regiment organized by Howell Cobb is largely forgotten. I hope to share some of the information I have gathered in this blog.

During the early summer of 1861, the ten companies of the 16th Regiment Georgia Volunteer Infantry (sometimes referenced as the Sallie Twiggs Regiment) were organized for service in Howell Cobb’s regiment. The companies were raised in the counties of Madison, Jackson, Gwinnett, Hart, Habersham, Columbia, and Walton, (although there were members from other counties and even a few from other states.)

The newly enlisted recruits boarded “the cars” at Athens and traveled to Richmond, Virginia in June and July. By August 11, 1861, all ten companies were encamped at Richmond. There they were assigned to the command of General Howell Cobb, and remained until Oct 18, 1861 when they were ordered to Yorktown. The Regiment fought with Magruder at Dam No. 1 and in the Seven Days battles around Richmond.

Assigned to McLaws Division of the Army of Northern Virginia, the 16th Georgia traveled into Maryland. At Crampton’s Gap (on South Mountain, near Burkittsville, MD,) the 16th Georgia would face its greatest challenge up to that point. Just three days after being badly overrun at Crampton’s Gap, the remnants of the Regiment took part in the Battle of Sharpsburg (Antietam.)

From there, it seems the 16th Georgia found itself in all the worst places. At Fredericksburg, they would lose their beloved General TRR Cobb at the stone wall. They were engaged again at Chancellorsville and, at Gettysburg, they battled in the  Peach Orchard and the Wheatfield. The 16th Georgia served mostly in the east, but also traveled with Longstreet to serve in the west at Chattanooga and in East TN. At Fort Sanders in Knoxville, bad weather, poor reconnaissance, and impenetrable earthworks resulted in devastating losses.

Returning to Virginia, the Regiment arrived in time to take part in the Battle of the Wilderness, and a few days later, at Spotsylvania, the 16th was called upon to fill a hole in the line at the Bloody Angle. From there, they march to North Anna and Cold Harbor where they were engaged yet again. They were part of the Confederate defense at the Siege of Petersburg and later, were part of Early’s operations in the Shenandoah Valley at Front Royal/Guard Hill and Cedar Creek, among others. They returned to the Army of Northern Virginia in the defenses around Richmond and, took part in the final battles of Sailor’s Creek and Appomattox Court House.

In April of 1862, the 16th Georgia regiment reported a force of 488 effectives. It lost 13 killed, 2 mortally wounded, and at least 52 wounded at Malvern Hill. In the Maryland campaign, the regiment lost at least 130 men killed, wounded, and captured.  The regiment sustained 77 casualties at Fredericksburg and 133 at Chancellorsville. It is estimated by some that the casualties sustained by the 16th Georgia in the Peach Orchard and the Wheatfield at Gettysburg may have been as high as 39% (121 of the 303 effectives.) The 16th lost at least 79 killed, wounded, and captured in the failed assault on Fort Sanders at Knoxville and 81 at the Wilderness and Spotsylvania. In the Shenandoah Valley campaign of 1864, the regiment sustained the loss of another 112 casualties (82 at Guard Hill and 30 at Cedar Creek.) At Cold Harbor, at least 40 men were killed, wounded and captured. Many were captured at Sailor’s Creek, including Brigadier General Dudley Dubose and Division Commander Maj Gen Joseph B Kershaw.  The 16th Georgia surrendered 2 officers and 56 men at Appomattox Courthouse under the command of 21 year old 1st Lieutenant William Washington Montgomery (Company E), who was the highest ranking officer present.

Up Next – The Captains and their Companies